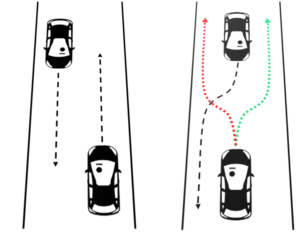 In this paper we investigate how to resolve conflicting motions for mixed robot–robot and human–robot multiagent systems. This work is motivated by atypical driving conditions, such as parking lots, where driving rules are not as strictly enforced as on standard roads. As a result, navigation algorithms should take into account the human drivers’ behaviors, especially if they prove to be in conflict with the common rules of the road. In this work we make use of safety barrier certificates with a direction bias to deconflict agents’ behaviour in a near-to-collision scenario, in compliance with local traffic rules. We also propose a tool to
identify the driving direction bias—both for human and autonomous agents.